President-elect Yoon Suk-yeol appeared on an episode of “You Quiz on the Block” that aired on April 20. [TVN]

Korea’s President-elect Yoon Suk-yeol’s appearance on tvN’s “You Quiz on the Block” was meant to be just one episode of an entertainment show featuring a politician. But after it aired on April 20, several disputes — ranging from host Yu Jae-seok’s attitude to allegations that the show had previously refused to feature President Moon Jae-in — stirred the nation. The backlash highlights the highly politicized and divided status quo of the Korean public after the presidential election in March.

“You Quiz on the Block” debuted in 2018 as a talk show and saw comedians Yu Jae-seok and Jo Se-ho strike up conversations with everyday citizens on the streets. After the outbreak of the Covid-19 pandemic, the show changed its format to filming indoors, mostly inviting ordinary people with stories or special occupations to star in each episode. In addition to normal citizens, celebrities and star athletes were also featured.

When it was announced on April 13 that President-elect Yoon would appear, thousands of messages were posted on the show’s website opposing the move. The controversy only escalated after the episode aired on April 20, as it turned out to be much shorter and more solemn than usual. Yu – initially condemned by Yoon’s opponents for putting Yoon on the program – became the target of criticism from Yoon’s supporters who claimed the emcee was cold and hostile towards the president-elect. 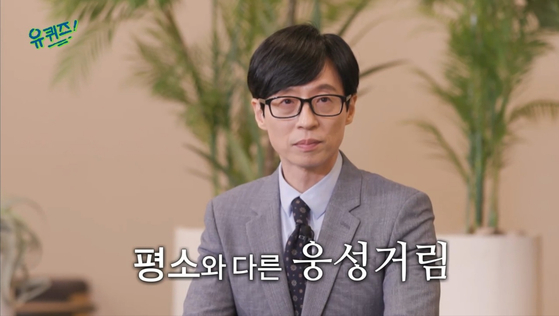 After the episode aired, some Yoon supporters accused the show’s emcee Yu Jae-seok of being cold and hostile towards the president-elect. [TVN]

“It was sudden…we feel really pissed off; We feel pretty pressured, and a lot of other factors,” Yu said during the episode, but with a smile and an upbeat tone of voice. Some pointed out that the editing was unsympathetic, with captions such as “[the studio is] Quiet compared to usual” and “Why are no staff members laughing? Some argue that the edit or alleged change in Yu’s attitude was simply an attempt to show respect to the president-elect.

Along with accusations by President Moon Jae-in’s Protocol Secretary Tak Hyun-min that “You Quiz on the Block” turned down an appearance by Moon on the show last year – which the channel denied – the show found itself at the center of a full-fledged political controversy.

Since Yu is well known to overseas fans of Korean content, many non-Koreans have taken notice of the debacle and were surprised by the intensity of the criticism Yu is facing.

What went wrong? Some think it is wrong to have a politician on an entertainment show because it can politicize the show or be used as a propaganda tool. But this criticism seems misguided, considering that politicians in entertainment shows are nothing new in Korea. Former presidents Roh Moo-hyun and Park Geun-hye have appeared on such shows since the early 2000s to show their relatable sides, as have recent presidential candidates Lee Jae-myung, Sim Sang-jung and Ahn Cheol-soo. . 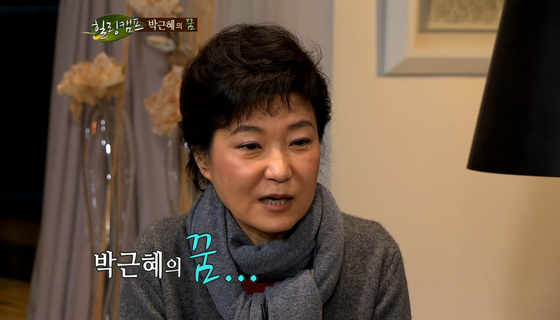 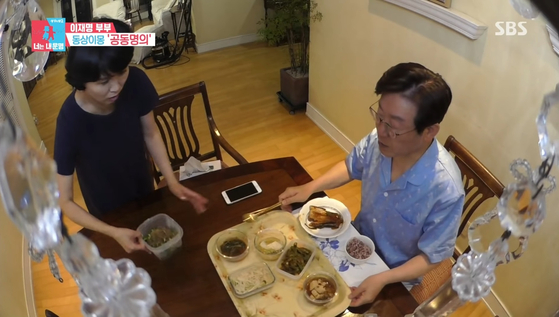 March presidential runner-up Lee Jae-myung has appeared on entertainment shows since he was mayor of Seongnam, Gyeoggi in 2017. [SBS]

A politician facing backlash for simply appearing on an entertainment show is actually unknown, but Yoon’s status as president-elect may be what makes this case different.

“Most politicians were on these shows to put on a laid back image while they were still candidates,” commentator Rhee Jong-hoon said. Before the presidential campaign. Sim appeared on SBS’s “My Little Old Boy” in 2019 as a representative of the National Assembly and Lee on SBS’s “Three Meals a Day” in 2017 as the mayor of Seongnam, Gyeonggi. “You Quiz on the Block” also had National Assembly Representatives Kim Yea-ji and Pyo Changwon – though they appeared as a visually impaired pianist and criminal profiler respectively rather than politicians.

“A president-elect, who is practically the president who will be inaugurated very soon, on an entertainment show is unprecedented,” Rhee continued. “Some wonder why Yoon is on such a show after the election is over, when there is no need to promote himself anymore. So they accuse him of trying to beautify his public image through the show. Eh Well, it’s true. Of course, politicians appear on entertainment shows to improve their image. We can’t call that a bad thing. 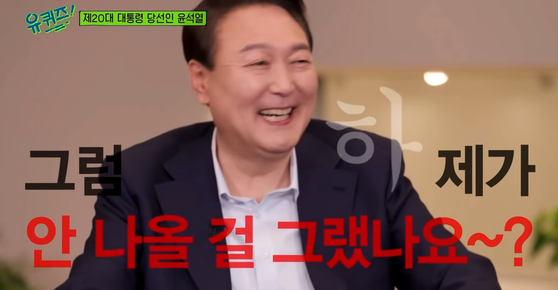 Yoon joking to Yu “Isn’t it an honor [to have me here?” and “Maybe I shouldn’t have come here” was condemned as arrogant. [TVN]

Yoon already needs to improve his image after sparking heated debate before he was even inaugurated. His decision to move the presidential office from the Blue House in central Seoul’s Jung District to Yongsan District with taxpayers’ money and calls to abolish the Ministry of Gender Equality and Family led many to see it as authoritative. Among those who are skeptical of Yoon, he jokes to Yu “Isn’t it an honor to have me here?” and “Maybe I shouldn’t have come here” was condemned as arrogant.

“Yoon has seen rather low approval ratings since the election due to a number of questionable issues, which made him unwilling to communicate with the people,” Rhee said. “I’m sure Yoon wants to redeem himself and start his tenure with more approval. Being on ‘You Quiz on the Block’ was part of that effort, but I don’t think he came across as relatable in this episode for make up for everything that happened. His followers love him anyway for his stern image as a principled man, so they’re probably also thinking “that’s not really what we asked for.” 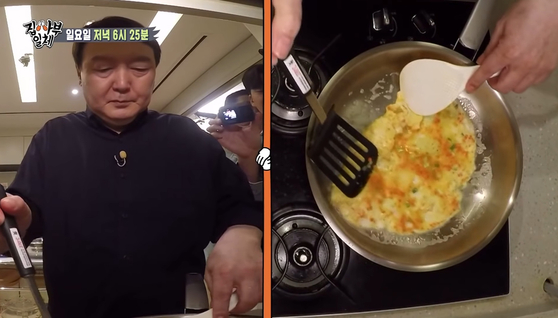 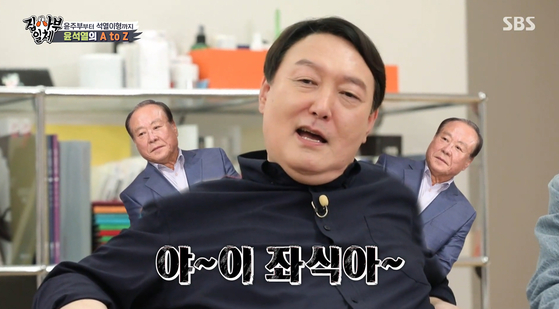 Yoon saw positive responses last September after appearing on SBS’s “Master in the House” and showing off his cooking skills. [SBS]

The main audience opinion is that the episode just wasn’t entertaining. Regardless of politics, Yoon hasn’t shared any new information about himself or shown another side of his personality. The reaction is a stark contrast to the largely positive response Yoon saw last September after appearing on SBS’s “Master in the House” when he showed off his cooking skills at home and shared stories of his young students. in law, showing a more human side that contrasted with his stern image as a prosecutor.

“I didn’t vote for Yoon, and I’ll just say I disagree with him on most things,” said a 27-year-old graduate student who wished to identify herself by her surname Moon. . “Even I thought the backlash was absurd because we can’t ban people from TV just because we don’t like them, although I didn’t like the idea of ​​Yoon trying to act earth- down to earth and to look relatable. The controversy surrounding the episode turned out to be much more interesting than the episode itself. I don’t have any particular feelings – it was just boring.

A more fundamental reason behind the backlash most likely lies in how Yoon won the election and became president-elect. While elections are always a tight event for Koreans, the 20th presidential race had an unprecedented margin; Yoon got 48.56% of the vote and runner-up Lee Jae-myung got 47.83%. There were more spoiled ballots (307,542) than the difference in votes for Yoon and Lee (247,077). For perspective, President Moon received 41.08% of the vote in 2017 while the runner-up received 24.03%. 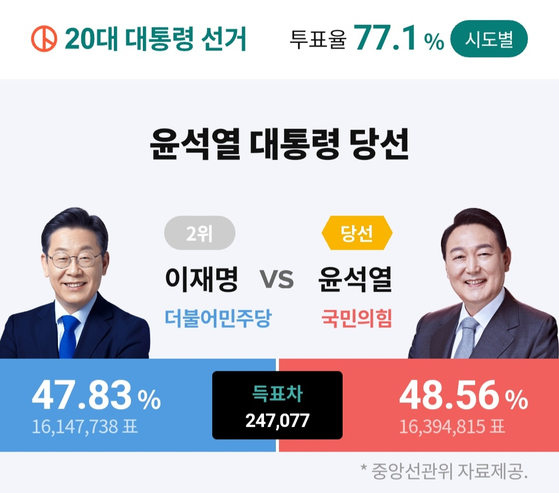 The 20th presidential race had an unprecedented margin; Yoon got 48.56% of the vote and runner-up Lee Jae-myung got 47.83%. [JOONGANG ILBO, NATIONAL ELECTION COMMISSION]

“If a candidate had won by a landslide, this controversy probably wouldn’t have happened,” said political commentator Lee Kang-yun. “The election was so close that anger and discouragement [among those who did not vote for Yoon] still persists. The heated emotions of the March election and Korean politics in general over the past few years have led to everything being highly politicized. When something seems politically remote, people split sides and attack anything that doesn’t seem to be on their side. We got used to it, but it’s a very unfortunate culture to have created.

Allegations about whether the show really turned down President Moon, or whether President-elect Yoon pressured the channel to have him, remain unconfirmed. However, it’s unclear exactly what each side stands to gain, even if their claims turn out to be true.

“It’s becoming a bigger problem, but no one really seems to know why it’s a problem in the first place,” commentator Lee added.

“Unless Yoon coerced the producers, there was nothing wrong with his appearance on ‘You Quiz on the Block’. On the contrary, politicians should be encouraged to communicate with the public as much as possible through various means. No one knows the truth yet, yet everyone is trying to speak louder than the opposing side. It’s just a very Korean event of our overheated politics; a side effect of our overly politicized society.”

Gogglebox puts out the best entertainment show at OzTam Overnights